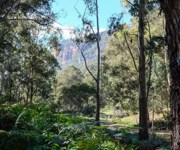 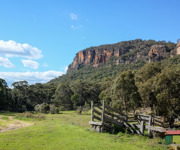 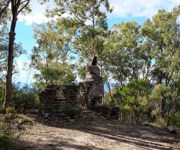 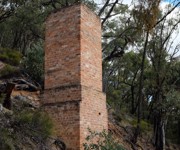 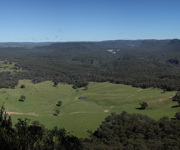 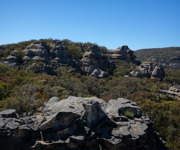 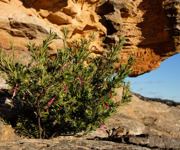 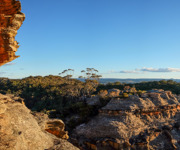 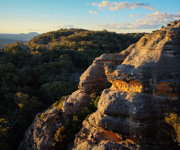 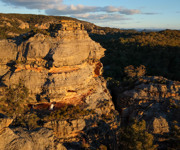 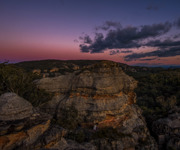 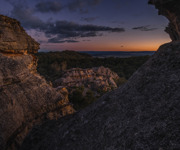 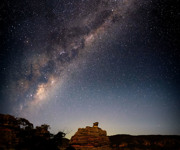 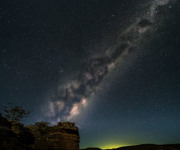 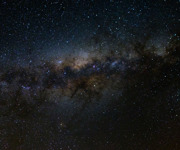 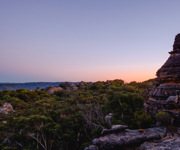 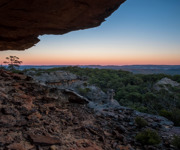 I had visited The Towers several times in the past but never camped there. I thought the dark sky and beautiful pagodas would be ideal for photographing the Milky Way rising over the moonlit pagodas.

On this trip we planned to camp on a narrow ledge and spend most of the night photographing the Milky Way.

Our packs were heavy. In addition to normal camping gear we were carrying tripods, cameras and batteries. Mugii Murum-ban SCA is very dry so we had to carry our water too.

We parked at Airly Gap and walked along the Tramway Trail past the relics from the Oil Shale days - an old stone cottage, cave houses, rusting machinery, chimneys and the like. There is so much to see it is well worth a trip just to wonder at the way the miners and their families lived 100 years ago.

We set up camp on the ledge I had remembered. It was a perfect spot with room for both of us, including Emanuel's tent. We spent the afternoon exploring and enjoying this beautiful part of the world.

As darkness fell it was time to get out the tripods and the cameras. During the afternoon we had scoped out where we would set up - care is always needed moving about with camera gear in the dark, especially on narrow ledges.

The wind was blowing a gale but we were sheltered by the pagoda walls that towered above us. If we had been on the tops we would have been blown away. We had a perfect spot down on our ledge.

The Moon was setting behind us as the Milky Way was rising. The moonlight was bright enough to light the pagodas but not enough to drown out the Mily Way.

After a successful night we enjoyed a leisurely breakfast, broke camp and headed off on our way back to Airly Gap.

We took a shortcut straight down a gully from where we camped. It took us straight back to the firetrail, avoiding the scrub and the detour to Saddle Lookout we'd taken the day before.

A trip to The Towers is well worth the effort and can be done as a day trip. There are several spots you can camp but you must carry sufficient water for a dry camp.