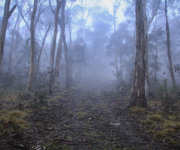 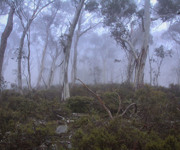 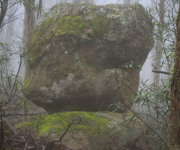 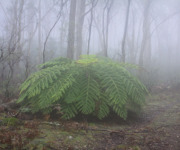 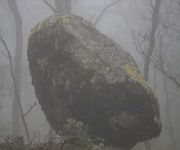 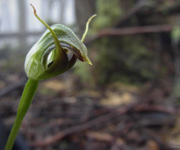 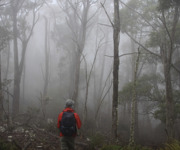 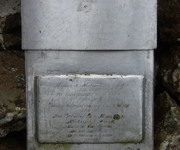 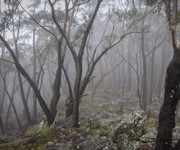 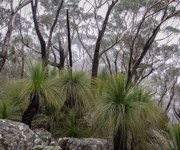 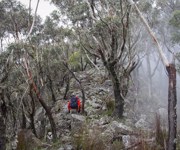 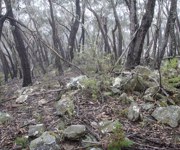 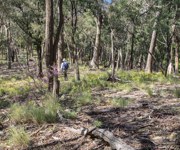 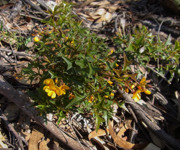 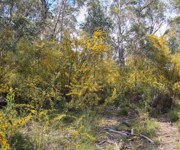 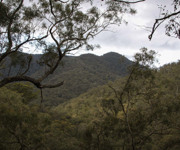 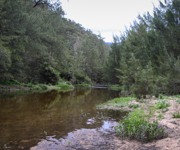 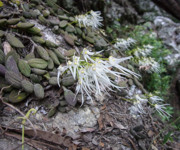 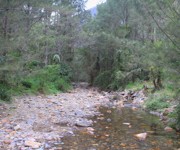 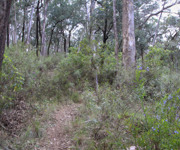 In the past I'd walked out to Mt Guouogang & back from the Kanangra Road and to Mt Jenolan from Dunphys Campground. Both walks were long day walks with early starts and late finishes. When I looked at the maps, the GPS traces from the previous walks, the distances involved & topography, I was sure it would be possible to walk from the Kanangra Road to Dunphys Campground, about 31 kilometres, in a long day. A complication for point to point walks like this is the long car shuffle.

Overnight rain in the area had left everythng wet. Visibility was very poor because of the thick mist/low clouds. We knew that if the clouds didn't lift, we would be navigating by map, compass & GPS grid references.

We set off up Whalans Fire Trail just after 6:30am. I wanted to see Green Hillock and Mt Whalan so we turned north along Luthers Fire Trail. At 1318 metres, Mt Whalan is one of the highest points around. The summit is quite open but visibility was limited because of the mist.

From Mt Whalan we turned east and then south, working around the wet gullies to pick up Whalans Fire Trail just north of Mumbedah Swamps. The mosses were very green. In places the ferns were waist deep. The rocks were often slippery, a problem that would remain with us for much of the day. Thick mist was swirling everywhere. We said goodbye to the Fire Trail about 1 kilometre west of Mt Krungle Bungle.

From Ferny Flat the route is across a narrow ridge that swings east and broadens to become Mt Guouogang. At a couple of spots along the ridge we noticed Greenhood Orchids flowering nicely. The slope to the west is quite steep but nothing compared to the east side. Jenolan Pit is a massive hole, almost 700 metres deep, formed by Jenolan Creek. Quite incredible.

According to the topo maps we'd be on narrow ridges most of the way from Ferny Flat until we reached Mt O'Reilly.

As we started turn east on Mt Guouogang we encountered thick heath for the 1st time on this walk. Up until then we had only to cope with thick bush. This was the real deal - banksia, hakea, isopogon - old, hard & almost inprenetrable. Last time I'd been here I found the heath didn't seem quite so thick on the western side. We stayed as low as we could until we were around the thick stuff. From there were able to make good progress - there were lots of paths through the heath which we followed when they went the right way. As we approched the top the heath become thicker as did the fog. Everything we touched was saturated. In places we just had to push through and by 10:55 we'd reached the Jenolan Trig Station on Mt Guouogang.

It was time for badly needed refreshment and a break. While we ate and drank we looked through the log book reading of the exploits of others who'd reached Mt Guouogang. We added our own brief comments, took the obligatory photographs and started off looking for the ridge that would take us from Mt Guouogang across to Mt Queahgong.

Mt Guouogang is covered with a low, almost impenetrable eucalypt forest. The only way to get any sort of view is to push to the edges or to climb to the top of the Trig Station. There wasn't any point - the thick fog hid everything.

From here to Breakfast Creek along the Krungle Bungles was new territory for me. I'd reached Mt Jenolan before but by climbing up Gaspar Buttress.

The route to Mt Guouogang was along the narrow ridges that linked the peaks in the Krungle Bungle Range. From Guouogang we had to find a very narrow ridge and follow it north to the almost level bench named Hawk Fell. After Hawk Fell the ridge swings north-east to Mt Queahgong.

The spur that leads down to Hawk Fell is a bit over 300 metres north-west from the Trig Station on Mt Guouogang. It is the 2nd spur and a bit higher than the 1st, which starts about 260 metres from the Trig & drops quickly into Guouogang Pit. It wasn't easy to find the ridge we wanted in the thick fog but after a few minutes we were heading down to Hawk Fell.

Hawk Fell is the narrow ridge linking Mt Guouogang and Mt Queahgong. It has very steep sides. The surfaces is mostly broken rock with hardy trees & a few shrubs and groundcovers. In a couple of places the surface is fairly level and walking is easy. On a clear day there might have been some nice views through the trees into Guouogang Pit on the right or into the Mumbedah Creek gorge. Not today - way too much fog. The rocks on Hawk Fell were extremely slippery and it slowed us up.

The ridge between Mt Queahgang and Mt Jenolan is very narrow and extremely rocky. Again there might have been great views through the trees but for the thick fog. At one point the fog lifted - one one side only. The fog stopped abruptly like there was an invisible wall - white one side and clear the other. Quite amazing!

When we reached Mt Jenolan it was time for a quick break for lunch. Thanks to the fog and the slippery conditions we were way behind the schedule we'd set for ourselves. There were no views on Mt Jenolan, just a pile of rocky rubble to sit on for lunch. The summit of Mt Jenolan is covered with trees. There are some nice views from the Gaspers a bit to the east but with fog hanging round and the time against us we headed north down the ridge to Mt Dwyer.

The fog started to lift as we reached Mt Dwyer and by the time we'd reached Mt McAviney it was gone - we were bathed in bright sunshine and warming up enough to put away our wet weather gear.

As we came down from Mt McAviney we started to see wild flowers - colour everywhere. The trees opened up and for a while it it looked like we were walking in a park. We started to make up some time.

At Mt O'Reilly we had to push through a very thick, tall wall of pea flowers. There were a couple of different species - absolutely stunning.

As we headed down to Scrubbers Saddle we decided we'd skip Scrubbers Hump this trip & head straight down to the Coxs River. In the middle of the saddle there was a cairn but we didn't see a track. We headed south-west down the ridge to get around the low cliffs that flank the western side of the Coxs River at this point.

Everything went well till we got to the Coxs River. It was quite a bit deeper than last time I'd been there. It was 5:00pm and we needed to cross before dark. At the point where we decided to cross the river was wide & slow moving and we could see the bottom quite well. Making sure everything was safely waterproofed we headed into the river, Bill first, me following a little up stream.

We used some long branches as poles to provide some support and test where we'd place our feet. A few metres into the river and the water was up to our rib cages & cold. There were no holes and the footing was quite firm - fortunately it didn't get any deeper and after a few minutes we were safely across and on dry land.

When we reached Breakfast Creek we took a well earned rest - our last break had been on the summit of Mt Jenolan, 3 hours ago. At a bit after 6:00pm we started up Ironmonger Spur. It was a tough slog to finish a long day but by 7:30pm we were on Ironpot Mountain, just as it was getting dark.

From there it was easy and we reached Dunphys Campground at 8:45pm. It had been a long, tough day, made harder by the thick fog and the slippery conditions but we were feeling pretty pleased with ourselves.

A view of the Kanimbla and Megalong Valleys from the Krungle Bungles
Last Updated: 08-05-2019