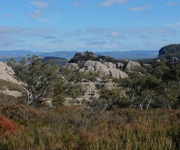 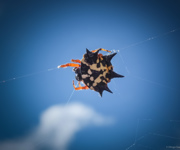 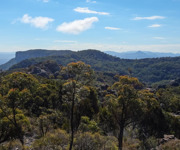 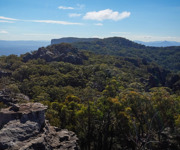 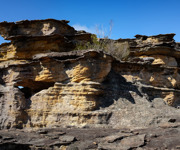 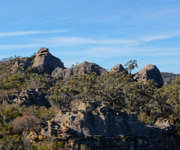 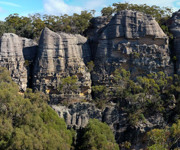 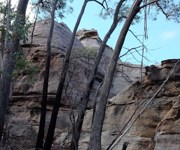 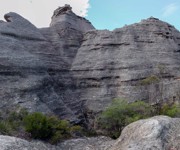 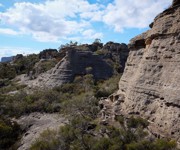 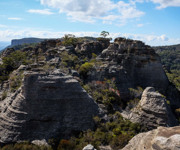 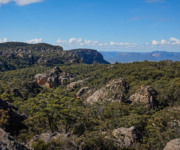 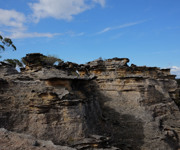 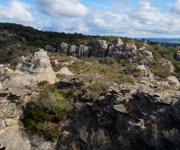 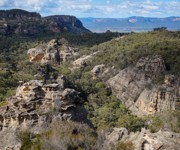 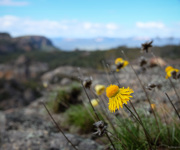 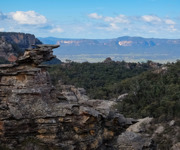 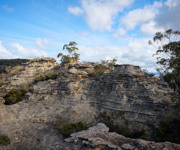 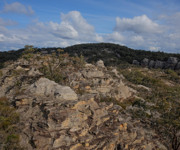 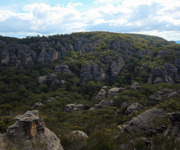 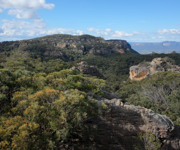 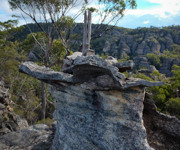 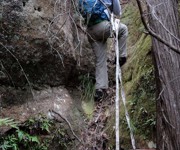 We followed the firetrail and turned north along the track to Genowlan Trig, turning northeast along Treasure Spur 100 metres before we reached the trig station. There are nice views to the south-west and north along this firetrail until you enter the she-oaks.

Treasure Chest Spur is a complex system of slots and pagodas. Major slots run roughly north to south intersected by smaller slots which run south-west to north-east. Amazing pagoda formations including the Watchtower and The City In The Sky are nestled amongst the slots. There is something to see everywhere you look.

There are many different routes along Treasure Chest Spur and they all lead to the City In The Sky. Make sure you look into The Valley Of The Dinosaurs or down The Valley Of The Kings. The pagodas lining those gorges are incredible.

And pay close attention to the fantastic shapes in the platey pagodas.

The huge pagoda reached a short while after looking into The Valley Of The Dinosaurs is The Watchtower. It is a huge smooth pagoda that offers excellent views in all directions from the top.

Next up is The City In The Sky, a beautiful pagoda complex that towers above the surrounding bush. There is so much to see - beautiful pagodas, views across the Capertee Valley to Mt Canobla, Pt Anderson, Red Rocks and Mt Dawson, views to Genowlan Mountain and Mt Airly and so much more.

Eventually we pulled ourselves away from The City In The Sky and continued north through the pagodas to look for a way down into Stringybark Valley. But there was one last treat - an old Survey Marker at the northern end of the coal and shale leases. We'd seen similar marked on other spurs in the area.

We followed a dry watercourse down through the pagodas, using a tape at point to get down a dry waterfall. At the bottom of the waterfall we traversed along 200 metres till we found a way down the scree slope to the valley floor and the firetrail.

The walk back to the cars is about 2k along the firetrail up through a lovely forest gorge. There is a short steep climb to meet the track to Genowlan Trig and then down the hill to the car.